More Than a Vote 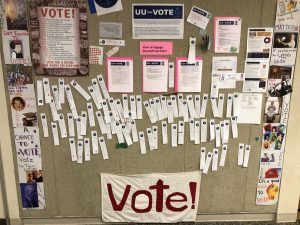 A little like a fly in amber, our “UU the Vote” bulletin board, assembled earlier this year by volunteers to promote this congregational initiative, stands in Sandburg Hall unseen by anyone but the few staff who drop in in now and again to work in our largely vacant church home. But like everything else in our congregation’s life, the campaign itself is up and going great guns in the world beyond: in cyberspace, in the mail, in the community.

Voting has always been a strong priority of our religious movement – it resides at the center of our 5th principle, recognizing the right of conscience and the use of the democratic process within our congregations and in society at large. But it is no exaggeration to say that in no year in at least my memory has it been more important that we exercise, promote, and protect this precious franchise.

It is important both as a civic exercise and a matter of faith. Voting is the machinery that makes democracy work and it is one of the places where our first principle, promoting the inherent worth and dignity of every person, is realized.

I am grateful to Minister of Faith Development Rev. Claudia Jiménez for her leadership in this campaign and for the diligent work of our UU the Vote coordinator Amy Moore. Their urging has resulted in dozens of our members – I am among them – sending out hundreds of postcards to homes of potential voters encouraging them to check their registrations and make a plan to vote. Some of you are getting trained as poll workers, others as poll watchers. Also, we plan on Worship Services both on November 1, before the election, November 8, after the election, and Vespers on November 4, the day after the election, to reflect as a community on all that we’re experiencing this season.

There are also opportunities in the UUA’s larger UU the Vote campaign. The campaign puts out weekly updates with lots of opportunities to get involved. Here’s a link where you can find it and sign up.

What part can you play? In a year when the President himself is actively seeking to undermine the electoral process it’s clear that individual citizens like us need to step up to our responsibility under the Constitution as “we, the people.”