Last Night I Had the Strangest Dream

Our hearts and minds weigh heavy with the people of Ukraine as we watch the news of the Russian invasion and listen to the dire warnings from leaders around the world. Ukrainian President Volodymyr Zelenskyy’s advisor, Mykhailo Podolyak, said: “A full-scale war in Europe has begun. … Russia is not only attacking Ukraine, but the rules of normal life in the modern world.”

After a restless night, I woke up this morning with this song written by Ed McCurdy in 1950, in the middle of the Joseph McCarthy Red Scare when the threat of war cast its dark shadow over the world, in my head. Pete Seeger was the first to record Last Night I Had the Strangest Dream that never made the top forty but was translated into several languages as it spread around the world.

Feeling helpless and depressed, I was reminded of this wonderful story that I read recently on Facebook about singer/songwriter and activist Pete Seeger who devoted his life to working for change. This story helped lift me out of despair and reminded me that we are not helpless. As the author of the Facebook post said, it matters who we are in the world. Here’s a link to a UU World article called, “Singing for Humanity” about Pete Seeger. A UU at heart, Pete officially became a UU later in his life and his story is inspiring and hopeful. 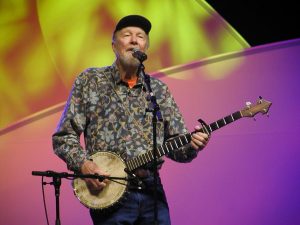 “In the 1970s, Pete Seeger was invited to sing in Barcelona, Spain. Francisco Franco’s fascist government, the last of the dictatorships that started World War II, was still in power but declining. A pro-democracy movement was gaining strength, and to prove it they invited America’s best-known freedom singer to Spain. More than a hundred thousand people were in the stadium, where rock bands had played all day. But the crowd had come for Seeger.

As Pete prepared to go on, government officials handed him a list of songs he was not allowed to sing. Pete studied it mournfully, saying it looked an awful lot like his setlist. But they insisted: he must not sing any of these songs. He took the government’s list of banned songs and strolled on stage. He held up the paper and said, “I’ve been told that I’m not allowed to sing these songs.” He grinned at the crowd and said, “So, I’ll just play the chords; maybe you know the words. They didn’t say anything about *you* singing them.”

He strummed his banjo to one song after another, and they all sang. A hundred thousand defiant freedom singers broke the law with Pete Seeger, filling the stadium with words their government did not want them to hear, words they all knew and had sung together, in secret circles, for years. What could the government do? Arrest a hundred thousand singers? It had been beaten by a few banjo chords and the fame of a man whose songs were on the lips of the whole world.”