Info from the Transition Team

Scroll to the bottom of this page to learn more about the Transition Team members who are pictured at the top of the page.

I’m a member of UU Asheville because participating in this faith community makes me a better person. It challenges me to think beyond myself, it grounds me in the basic goodness of humanity, and comforts me in the most trying times.

The Transition Team meets monthly, and in our first two meetings we’ve gotten to know one another, have reviewed the time lines for transition activities, and provided feedback on current Congregational activities. Like the rest of you, we’ve struggled with the latest surge of COVID curtailing in-person activities and suggested ways to safely get back together. One of the important ways to interact is just to socialize informally and perhaps there are opportunities to use the new outdoor spaces on the UU Asheville campus for that purpose.

We’d love to hear from you on any aspect of the UU Asheville Transition. All communication with Transition Team members is confidential.

Email addresses for the members of the Transition Team can be found in REALM.

Members of the Transition Team

We have five talented and dedicated UU Asheville members (bios are found below) who have agreed to serve as the Transition Team for Rev. Cathy Harrington. Your Board of Trustees assisted in identifying this diverse group of people who will represent the congregation in a variety of ways.

The role of the team is to meet regularly with the Interim Lead Minister, to assess needs, evaluate resources, set goals, determine priorities, and follow through on basic questions and focus points for a congregation in an interim time. They will also provide advice and guidance to the entire Intentional Interim process. Most importantly, they will seek input from you and help keep you informed about the process and progress of our work together.

Here’s a little information about each of the members pictured above.

John Bates moved to Asheville in 2002 to continue his work studying climate using satellite data. He became Division Chief at the NOA National Climatic Data Center, has over 50 peer-reviewed journal articles, and retired from federal service in 2016. John has been active in the local community, especially at the Unitarian Universalist Congregation of Asheville (UU Asheville). He served on the UU Asheville Board of Directors from 2012-2016 including as President (2015-2016) and as Convener for UU Asheville during the Lead Minister’s sabbatical in 2017. He enjoys group exercise at the YMCA, walking with his rescued Labrador, Wendy, and working a weekly shift sorting food at Manna Food Bank. He was awarded Outstanding Heroic Act Award 2009, Excellence in Public Service, Buncombe County NC.

Nancy Bragg – UUAsheville member since 2010. I want to be on the Transition team because I believe important work happens “in between” endings and beginnings. It’s a time of reflection and insights. I get energized being part of others’ discernment processes, which is part of my Spiritual Director role. I bring my skills in deep listening, facilitating, and finding patterns in responses. I feel comfortable talking with many congregants from my varied involvement over the years in adult programs, our grief group, our Justice Ministry Council, a Me and White Supremacy reflection group, RE, our Welcome Team, and worship services.

Jensen Gelfond began his UU journey as a child in Religious Education at Morristown Unitarian Universalist Fellowship (MUUF) in New Jersey. He moved to Asheville in 2008, where he discovered UU Asheville and became a member in 2015. He connected in a new way with UU Asheville after the George Floyd protests of 2020 as he joined UU Asheville’s Dismantling White Supremacy Support Group and was connected by UU Asheville to Story Medicine Worldwide. Jensen is working towards racial healing in Asheville.

Julie Bass Ransom -Works professionally as a PA-C seeing young adults for mental and physical health, as well as gender-affirming medical care.  She writes: I felt called to join the Minister’s Transition Committee. I’ve been part of UU Asheville intermittently since high school, then on a regular basis for the last 15 years. Having 2 youth in RE, volunteering in various roles including teaching Coming of Age (CoA), as well as being part of a parents and family covenant group has made me feel pretty invested in the success of this group.  Having a new interim minister during a pandemic used to be an undreamed of challenge for our congregation. I’m glad to be able to introduce Rev. Cathy to our ways as well as to learn from her experience and her UU expertise. Please join us in welcoming her aboard.

Buck Schall: I think the Asheville area is great and have enjoyed living here since 2010. It is not perfect, of course, so I am dedicated to doing what I can personally and professionally to make it a better place.  I previously worked as a community mental health provider and became a real estate agent in order to combine my interests and aspirations.  My first contact with Unitarian Universalism was in New Orleans and then became active in Johnson City when my family and I briefly lived there before moving to Asheville. I have a talent for taking the emotion out of important decisions such as this transition while also taking any involved emotions into consideration. I am a good and patient listener and intends to do my best to bring those things to this transition process in a helpful way.

We are solar powered 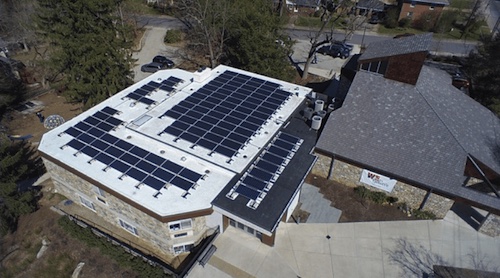 Get the Weekly eNews