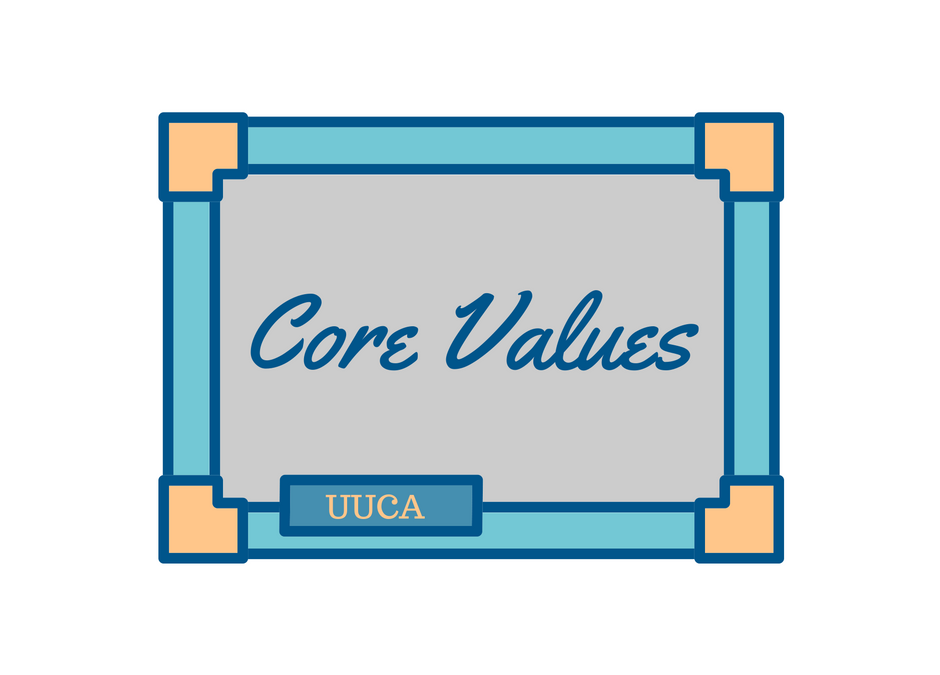 One of the things that we celebrate as a congregation and as a religious movement is that we affirm no creed or doctrine that we believe encompasses religious truth. The living tradition in which we stand honors many sources of religious understanding, but we privilege no particular text or teacher as the sole fount of wisdom. Each of us in our own reflections, in conversation with others and through work we are called to in the larger world, develops our own centered sense of where our faith, our sense of that in which we can trust, lies.

That can make it hard, though, when we are asked to name what is core to us. What guides us in deciding what our work as a congregation is? Why would we do one thing instead of another, and to what purpose? The short answer to this line of questioning is that we are centered in values that we affirm as a congregation that speak to our collective understanding of what is true and good, that give our lives meaning and fill us with hope.

I think that if we were to have a conversation, we’d find that we pretty much agree on those values, though we might also hear some different ideas that open up new possibilities. But here’s the interesting thing: to my knowledge we at UUCA have never actually had that conversation – until now!

I’ll get back to the – until now! – in a minute, but first you might ask: how could it be that we’ve never had that conversation? Well, it’s not as if we haven’t done meaningful and wonderful work as a congregation for ourselves and the world, but for some reason we’ve avoided focusing on the values underneath it.

This isn’t to say that we have no words to guide us. Many of us look to our seven Unitarian Universalist principles for that purpose. It’s worth remembering, though, that the principles were not intended as a statement of values. They are framed as terms of a covenant that member congregations of the Unitarian Universalist Association have with each other. In it, congregations agree to “affirm and promote” such things as “the inherent worth and dignity of every person,” and so on.

The principles are good, but we’re looking for something deeper: basic values that underlie the principles, that speak to our sense of what has greatest meaning in our lives. It’s hard to articulate because we’re really looking at feelings that emerge from our experiences. So, it takes some digging and head scratching, but in the end it can give us the kind of clarity we need to awaken to the work of living our values every day.

It may sound a little daunting, but it actually isn’t so much. In fact, it’s fun. I know because I took part in a meeting your Board of Trustees had with members of the congregation who will be facilitating this conversation with you in several venues in the next month or so. Keep an eye out for their announcements about your opportunity to take part.

Why has it taken us so long to get around to this? Part of it, I think, is that we’ve just kind of assumed we’re all on the same page. And part of it may be that we’re a little bit shy about bringing up this deep stuff with each other. A number of us were raised in or exposed to religious traditions where we felt shamed for bringing up our own ideas of what is good and true, what is sacred or holy, and worry that we might look foolish or that this kind of conversation might stir up dissension.

It is true, of course, that when we open a conversation like this, we can never be sure where it will go, but I believe that rather than stir division, this exercise will energize us and give us the clarity we need to live into the mission that calls us.