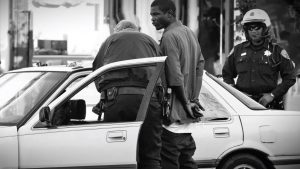 Racially Charged: America’s Misdemeanor Problem exposes how our country’s history of racial injustice evolved into an enormous abuse of criminal justice power.  13 million people a year – most of them poor and people of color – are abused by this system.

Through first-person accounts of those charged under the Black Codes of the Reconstruction era paralleled with the outrageous stories of people trapped in the system today, the film brings to light the unfolding of a powerful engine of profits and racial inequality. With the emergence of the Black Lives Matter movement, this film provides historical context and examines America’s history of racist oppression.

“A powerful, emotional and important film… Robert Greenwald and Brave New Films leading the charge, once again. The film powerfully illustrates that every year America arrests, prosecutes, and jails millions of people, overwhelmingly Black and Brown, for minor offenses. This is neither an accident nor inevitable.
Watch, absorb, and then go out and take action…”
~ Anthony Romero Executive Director, American Civil Liberties Union

Note: This film will be viewed on Zoom. Send a request for the link to Charlie Wussow at mnpopi@icloud.com by Thursday, June 17th. There will be a discussion after the screening of the film.

This screening is free.  Donations are gratefully accepted.