A Crime on the Bayou is the story of Gary Duncan, a Black teenager from Plaquemines Parish, a swampy strip of land 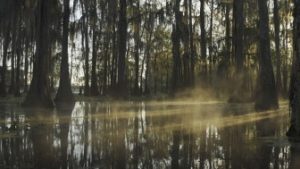 In 1966, Duncan tries to break up an argument between white and Black teenagers outside a newly integrated school. He gently lays his hand on a white boy’s arm. The boy recoils like a snake. That night, police burst into Duncan’s trailer and arrest him for assault on a minor. A young Jewish attorney, Richard Sobol, leaves his prestigious D.C. firm to volunteer in New Orleans. With his help, Duncan bravely stands up to a racist legal system powered by a white supremacist boss to challenge his unfair arrest. Their fight goes all the way to the U.S. Supreme Court, and Duncan and Sobol’s lifelong friendship is forged.

‘Vivid…Provide[s] an unusually palpable sense of just how much deeply-ingrained institutional and cultural bias needed to be overcome for the civil rights movement to make real headway…[An] engrossing, flavorful document.’ Dennis Harvey, Variety

‘A Crime on the Bayou never explodes with fury. But that doesn’t mean you won’t feel enraged while taking in the maddening series of systematic wrongs committed against Sobol and Duncan.’ Robert Daniels, The Los Angeles Times

Send a request for the link to Charlie Wussow at mnpopi@icloud.com by Wednesday, November 10th for the Zoom link.  There will be a discussion after the screening of the film. Runtime: 91 minutes

There is no charge for viewing the film but donations to cover the license are welcome.  Click DONATE on the left menu and select General Fund or text UUAVL to 73256.