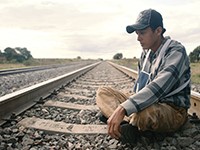 Friday, October 14, 7pm  In person and on Zoom
ABOUT THE FILM

Mexico and the United States crack down on the trails north, forcing immigrants into more dangerous territory. Told against the backdrop of the North American migrant trail, ‘Border South’ weaves together migrant stories of resilience and survival from different vantage points. The film exposes a global migration system that renders human beings invisible in life as well as death.

“Compassionate…Vivid…We receive the message strongly that these are ordinary people expected to do extraordinary things…This is skillful film-making, not to present the migrants as heroes, but just as people with mundane plans and dreams like the rest of us.”

Note: This film may be viewed in Sandburg Hall OR on Zoom.  Viewers in Sandburg Hall MUST wear masks.  If you intend to view the film on Zoom, send a request for the link to Charlie Wussow by Thursday, October 13th.